Got a problem or a question after you login to the game client? Post them here.
Please bear in mind that you can talk to the guides and the GMs inside the game as well.
Post Reply
18 posts

Hello Friends,
This post is to bring out light on some of the recent events happened in game. As we all know few months back Rishi Jaiswal aka ‘’Smileyy’’ got 2 souls. The issue here is not about Smileyy investing his money in game, but if *censored* scammers like him invest in game, they need to recover it out via scamming people inside the game.
Recently, Smileyy took 7k from a person ‘XYZ’ to arrange a g10 kit for him, if he couldn’t arrange he promised to give his own xbow kit to that person. Now after 30mins, he said he couldn’t arrange the g10 kit so he gave his own g10 xbow kit just to gain XYZ’s trust. Now after few hours, he calls XYZ and literally starts begging him that he needs some urgent cash coz he wants to buy some stuffs in A3mania, he first asked 30k and then slowly came down to 15k for own char. XYZ being a new person to this game, believing an aura 5 char with 2 g9.5 unique wont scam, after getting some 20+ calls thought of helping Smileyy just out of pity. Now Mr.Rishi Jaiswal took 7k in a bank account named as Rohit in Jamsedhpur and other 15k in Sandeep named bank account in Jamsedhpur (those might be his real life friends, he is using their account to scam people, n for infor. Rishi himself stays in Jamsedhpur).
Now he has the ballz to call XYZ and say him that he is a scammer and to return his g10 kit back, after scamming him 22k in less than 3 hours. Just see the pathetic level this guy can stoop down to. XYZ is not concerned about the money he lost, because it’s his fault and he has to learn it the hard way. The thing we want to bring out here is when people like Rishi Jaiswal get unique weapons via investing RC, they in return spoil the server and scam people coz they cannot afford it as well as their upbringing is shit. Before scamming, he was talking like a school girl crying for help, begging for money or his life will get into trouble, and once when they get what they want they reveal their real cheap moron self. We just want this not to happen with anyone else and wish he pays for his ill deeds.
This great Rishi Jaiswal aka Smileyy shows himself to be some macho with great gaming skills n all but as you see at the end he is a Fraud, a scamster, a guy with 0 moral sense and a pathetic human being. If only Gamemasters can put end to this shit by taking some action then we better get rid of him. I can even provide proofs to a3india support if Gamemasters want. I request all the other people who got scammed my him, post here so that GMs believe the gamers and take necessary action.

I know I made a mistake, I am new to game, I got tempted, I am sorry about it, I lost 22k, I made a horrible mistake and I have to repay it myself. But if no action is being taken, this guy will again scam and cheat other people in-game.

sad.. Smileyy is big scamer.. he even purchsed 2 soul in RC few days back.. from 2 month he shouting from noob char selling arnir sunetz.. when U pm he deals and show and says 20k each in RC.. he wont sell, he will just take money..
The best thing will GMstorm banning smileyy and taking his 2 g9.5s then he will know how it feels to scam innocent ppl..
Top

Gamers in-game repeatedly complain Guidefury about Smileyy. He even tried to scam me once with in-game stuffs but Guidefury helped me. GMs really help, I am witness .
Smileyy purchases things in RC and sells and scams people in between. Well it’s sad that this thing happened to you but yea you also committed a mistake and it’s good you accepted it. People like him, prey on innocent new gamers who don’t know about them.
You won’t get anything back coz RC was involved but I suggest you to mail a3support once. They investigate fairly and give results. I wish Gamemaster’s take note of this and really take action against coz 22k is a fair big amount. If we turn blind eye to these type of big scams its really bad for the server.
You cannot just leech chars, take contracts, sell stuffs in RC and enjoy this beautiful game. Stop this scamming or quit this server. We need more people who really want to play this game and not earn bread butter from it. Really pathetic person this Smileyy turns out to be.
Anyways Happy Diwali everyone. Waiting for some exciting events

Smileyy wont scam .fake post by haters because he got 2 g9.5s.
Top

i know Smileyy personally. he is not a scammer and dude if you got scammed post in forum from your real id .
real smileyy is richie rich in real life ..i dont think so he need to scam rc.
Top

lol creating 2 new and fake ids and posting yourself wont help you Smileyy.
The way you yourself wrote above “Real life Smileyy is richie rich” proves everything. Means you think everything in-game can be purchased in RC and that you use it to hide your dirty deeds. Keep your money with you and get ready to face results.
GMs know every move you make. They can easily track the Arrnir and sunitz moved from Smileyy to which chars. It’s just a matter of time, once GM looks into the issue, scamster like you are done.
Top

That chût Rishi aka Smileyy - Daily frag of Quanto has been like that since ages, and to be honest even GMs know that pretty well but still, they want to keep bugger in around the server and he is spared every time even though caught red-handed (Possionarrow incident). Everyone knows that he bought 2 souls in RC, but GMs got dhritarashtra on their side they can only hear but can not see whats happening in the server. Now that mfers scamming in game players to recover his investment. Sad state of A3 India.
Best p2p Applications
Top

LOL ! this had to happen.. I was warning everyone in A3 to take care coz Smileyy was naked from few days. This guy sold his g10 xbow kit in RC and tats y he was naked. I understood he was upto something but scamming someone's 22k is a big thing. Shame on U !
Smileyy naked and coming online very seldom, everything was understood..

anyways just to prove that you were going to scam.. Even i pmed U for arrnir n sunitz n U told me to cm Q strg and showed me these stuffs. GMs can easily track the ip of the char 'ULTRASTRG" shown in the pic and match it with Smileyy's. He was asking RC for these stuffs. I avoided coz I knew it was Smileyy and he was upto a big scam. This shit happens when people like him purchase stuffs in RC, they scam other ppl to realise what they invested.
_(O_o)_ Welcome to Hell. Here's your copy of Windows. _(o_O)_
Top 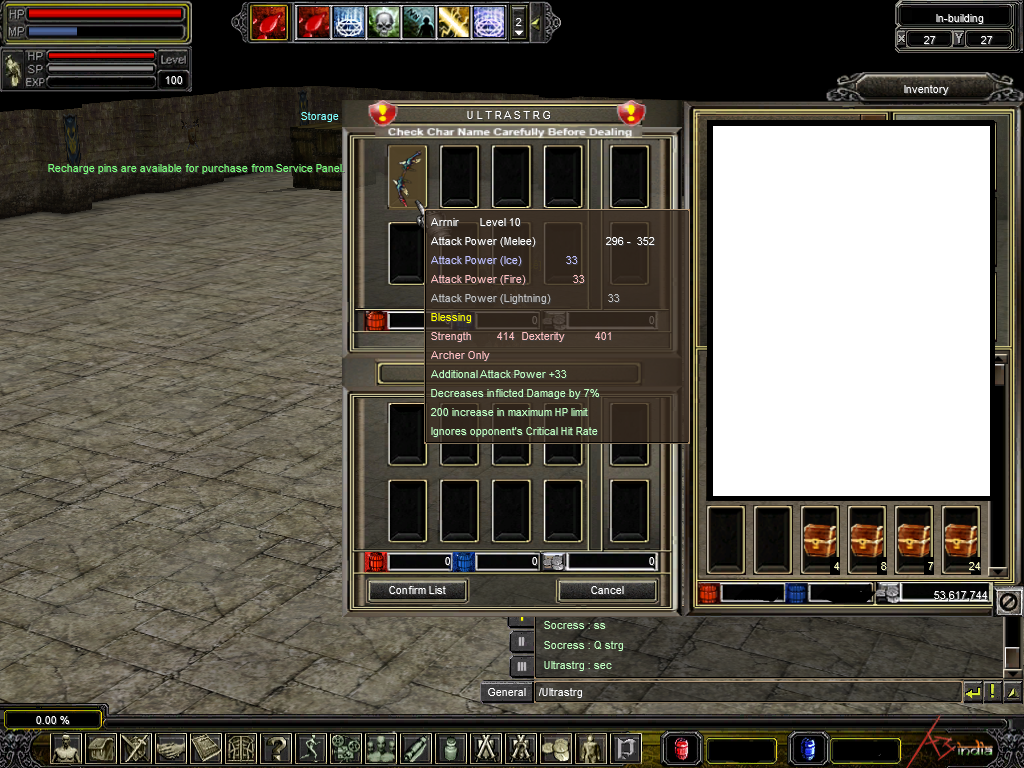 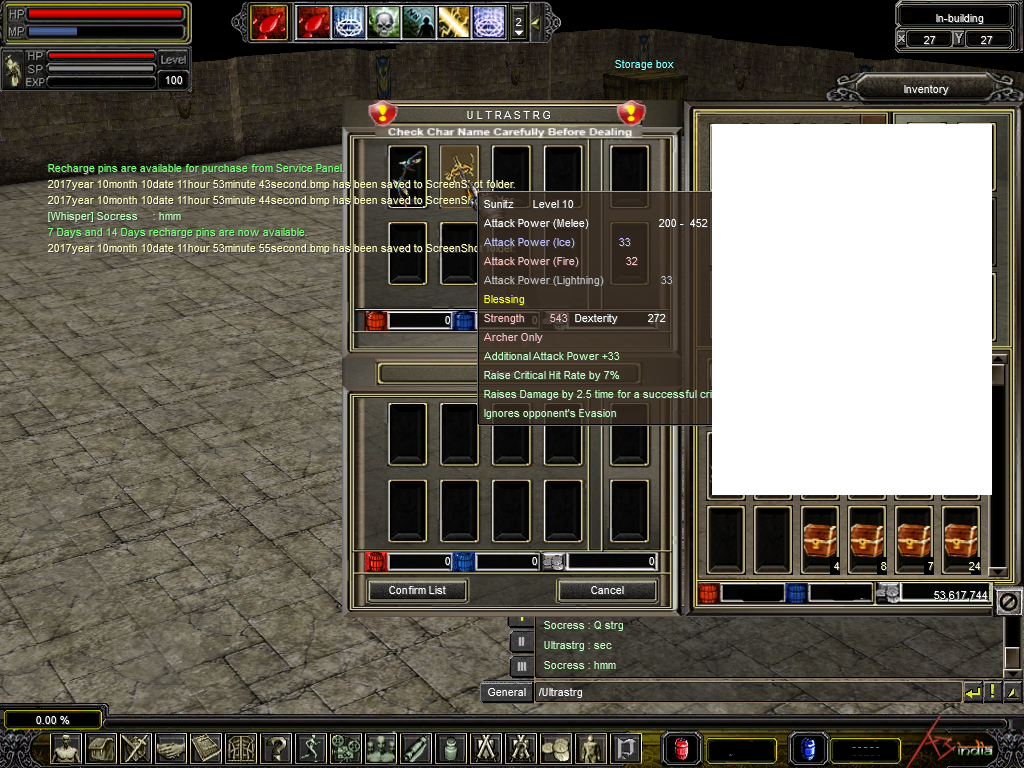